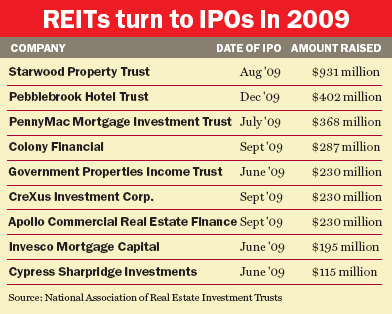 When all else fails, there's always the stock market. That seems to be the mantra of many real estate companies that, faced with few options for raising cash, are turning to the equity markets and issuing initial public offerings.

Sources say these REITs are coming to market with IPOs for several key reasons.

For one, REITs want to raise money now because many took out five- and 10-year loans that will soon be coming due.

In the past, these companies could simply refinance. But with property values down and banks now demanding loan-to-value ratios of 60 to 70 percent cash, the math no longer works. If, for example, you have a $70 loan on what was a $100 property, and that property is now valued at $50, you have to actually put up cash to refinance, said Michael Blair, a Chicago-based real estate attorney.

"A lot of these operators have substantial debt on their properties, that was put on at a time when the properties were valued at a much higher amount. That debt may be coming due soon, and it's difficult to refinance," Blair said.

However, the drive to IPO REITs is not just about finding ways around refinancing. The sector was hot in 2009, with the Dow Jones Equity All REIT Total Return Index up 31 percent versus a 25 percent jump in the S&P 500. The performance of the IPOs, meanwhile, has varied, with some slightly up and others down.

Of course, many of the traditional financing options for real estate companies have closed. In the past, these companies relied on private equity firms, private placements of debt, or bank loans. But private equity investors have grown skittish, and debt investors want more transparency.

Bank lending, meanwhile, is likely to remain shut down so long as the mortgage-backed securities market is dead.

"Anyone looking for access to capital for commercial real estate investment must do it through the public markets," said Brad Case, vice president for research and industry information at the National Association of Real Estate Investment Trusts.

"People like the visibility of the public markets," Nagelberg said.

What's more, he noted that these companies are not likely to stop with one offering.

"Real estate people gobble up money like Pac-Men. They are hardwired to consume capital  and right now, the cheapest capital in the foreseeable future is in the public markets," Nagelberg said.

Indeed, sources said there are nearly two dozen deals sitting in the pipeline. One of the largest is American Realty Capital New York Recovery REIT, which is seeking as much as $1.7 billion to buy properties in Manhattan, as The Real Dealreported in December.

Some REITs already own property and want to buy more -- particularly distressed real estate. Other REITs, known as blind trusts, have no property yet but want to take advantage of pending bargains. (Blind trusts are a relatively new phenomenon.)

But the ability to raise funds is hit-or-miss. Pebblebrook successfully raised $350 million in a blind trust in December to buy distressed hotels. However, the New Jersey-based Chesapeake Lodging Trust, which tried to raise $250 million, was forced to yank its IPO because of a lack of investor interest.

It's not just blind trusts that have had difficulties. Since August, five deals have been postponed. Aviv REIT pulled its nearly $300 million IPO in November in the face of tepid demand. And Colony Capital was only able to raise half of the $500 million it hoped to raise last fall.

"You know there's money to be made and that people will make money, but having said that, you've also seen over the past two or three years very sophisticated people -- the Blackstones, the Apollos -- lose money in some very visible transactions," he said.

Nagelberg likened the pipeline of deals to airplanes queued up at LaGuardia -- but he doubts that the proposed deals will all get done. "Unless you're of the ilk or stature of someone like Richard Rainwater or Sam Zell, you're not going to make it," he said.

Of course, in order to buy distressed assets, someone has to be selling them, and many investors have been reluctant to do so.

But some believe that's about to change.

"There are some signs that transaction volume may have started picking up. Investors want to be in a position to pick up those properties," said NAREIT's Case.

All rights reserved © 2010 The Real Deal